Used in jewelry since the beginning of antiquity, pearls come from a natural animal process and are composed of successive layers of mother-of-pearl which gives them this shiny and multicolored appearance. There are three types of pearl: the ones found in nature known as natural pearls (no human intervention), pearls from culture ponds and imitations of pearls generally made from heated glass.

Small mother-of-pearl ball and generally white or gray, the pearl is the creation of certain mollusks, such as oysters and also mussels. For a mollusk to create a pearl, an irritating object (such as a grain of sand, a pebble or a small debris) must seep inside it, the mollusk will protect itself from this intruder by l surrounding mother-of-pearl.

This type of pearl is mainly found in oysters, but is very rare. Indeed, few oysters will be attacked by an irritating object and will therefore protect themselves and form a pearl. It was also necessary to find the oyster that had a pearl in it and it had to be of good quality (fairly round and with a fairly thick mother-of-pearl).

The pearl has always fascinated men. However, failing to understand the mechanism of their creation, they often saw in it the sign of divine intervention. Thus, the history of the pearl goes hand in hand with the history of civilizations. Our guide offers you a retrospective on the history of pearls through the ages.

Proof of its very ancient use by humans, pearls have been found in a tomb dating back to 5,500 BC in the United Arab Emirates.

The first writings about pearls come from China and they date from 2300 BC, they describe this gem as a gift of nature. Other peoples knew the pearl, this is the case in India or Egypt which also considered it as a magnificent and sacred gem.

In the West, it was Alexander the Great, who during his conquest of the East (from Persia to the Indus) from -334 to -325, popularized the pearl as jewelry. It was however already known by the Greeks before that time, they even called it “Tears of Aphrodite” from the name of the goddess of love.

In ancient Rome, the pearl was considered a true symbol of wealth and power, only certain ranks of Roman society had the right to wear it. Still in Rome, there was a tradition that high-ranking Roman families buy one to two pearls a year for their daughter who – reaching the age of the majority (the pearl being very rare and expensive, even rich families could not buy several of them at a cost), would receive a magnificent river of pearls.

For the Arabs and the Koran, the pearl is one of the most fabulous treasures provided by paradise. Indeed, the Arab people, like the Persians and the Assyrians long before him, discovered very early the pearls which were relatively abundant in the oysters of the Persian Gulf. They appreciated the natural beauty of this gem and the colors of its mother-of-pearl that iridescent with a thousand reflections.

The pearl crossed the centuries remaining very rare and precious, until the Japanese discovered a way to produce pearls in a more industrial way, it is the birth of the culture of the pearl in the middle of the twentieth century. The main artisan of the discovery of pearl culture is Kokichi Mikimoto.

What are the qualities of a pearl?

1 – Its mother-of-pearl / its lustre
The first element you will need to check to ensure the quality of a pearl is its lustre. This is actually the natural shine of the pearl. A pearl of prestige will be very bright.

2 – Its size
The size of the pearl is a very important criterion to take into account, because the more a cultured pearl has a large diameter, the more expensive its price will be because of its rarity. Thus, the most beautiful pearls are often the largest.

3 – Its surface
The classification of the pearls makes it possible to determine the imperfections on the surface of the cultured pearl.

4 – Its shape
Another important quality criterion is the shape of the cultured pearl. Thus, a pearl with a very round shape will be more valued than an oval pearl or a drop of water.

5 – Its color
As for the color of the pearl, it is not a very important element to determine its value, however it will allow a classification according to the shades and shades.

6 – Its thickness
Finally, the thickness of the mother-of-pearl must be taken into account. Indeed, the thicker the mother of pearl, the higher the price of the pearl. 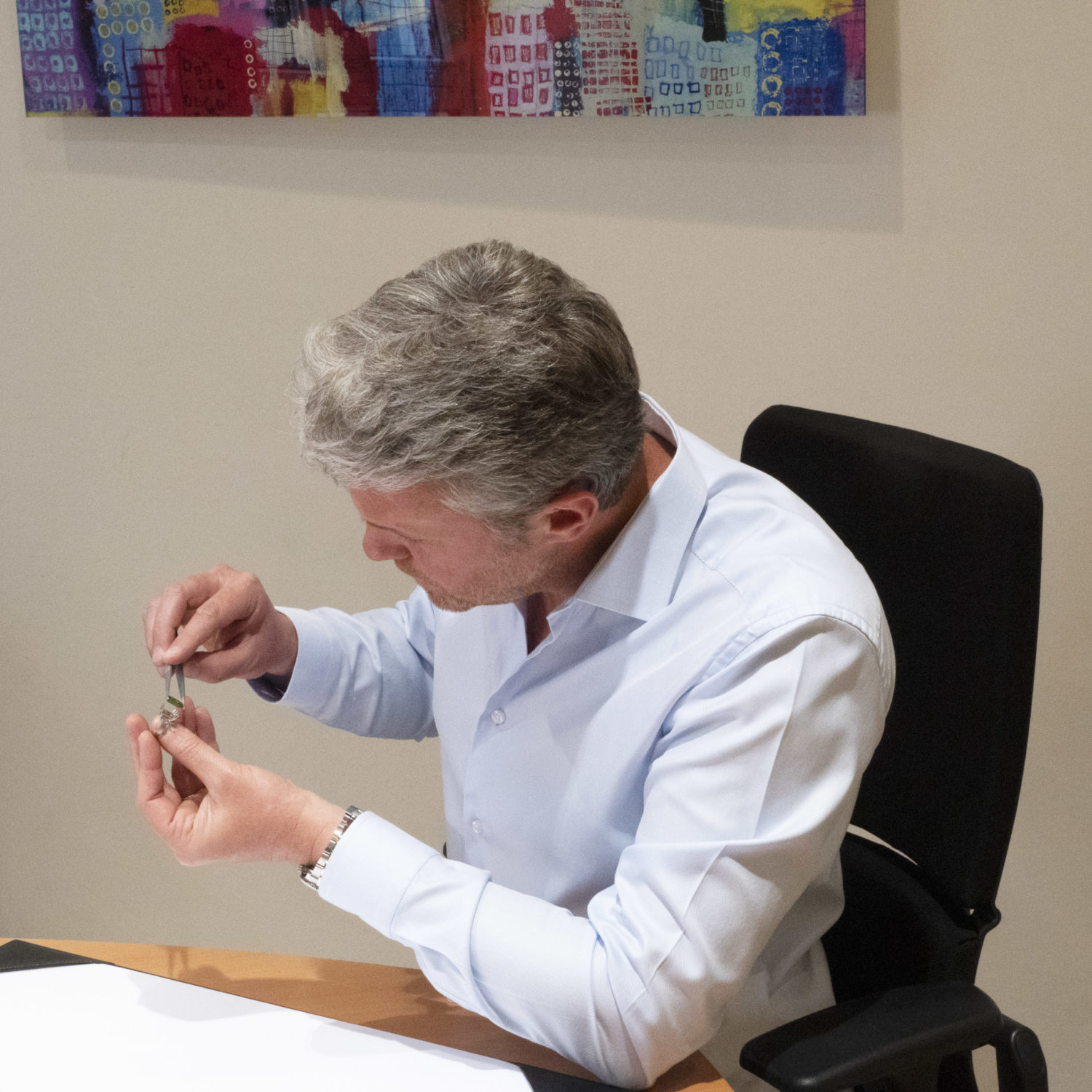 What are the different kinds of pearls?

Formerly known as margarita or union, the pearl is a limestone concretion made by some bivalve mollusks in reaction to an irritant that seeps into its shell. They surround this foreign body with a layer of mother-of-pearl (calcium carbonate) thus creating a pearl.

Its discovery is not new. Archaeological excavations have found it in graves that are 32,000 years old.

A symbol of purity, wealth and prestige, from ancient Rome to Victorian England, the pearl has always been the object of fascination and covetousness. At the beginning of the 20th century, the Japanese Kokichi Mikimoto opened the first pearl farm and developed the pearl culture, a technique that has since spread to all the archipelagos of the Pacific Ocean.

Each pearl is unique even if they can sometimes be difficult to differentiate from each other. Its size, shape, symmetry, color, transparency, lustre, texture, surface clarity and depth brightness (the East) are all characteristics that define it and increase or decrease its value.

The color of the pearl, for example, depends on the type of mollusks in which it is formed, its nutrition, the chemical component of its minerals and the water in which it bathes. There would be a thousand and one other characteristics of the pearl that we could focus on but let’s focus on the types of pearls as the title suggests.

There are four major sources for cultured pearls:

Akoya pearls mainly produced in Japan, naturally pink, yellow, creams and green they are reprocessed to become champagne, white or silver. Refined, their brilliance and discrete multicolored reflections give rise to delicate jewelry.

The pearls of Tahiti, Mabé and Kenshi have been cultivated since the 1920s, but it is only after the help of Japanese specialists that the activity of pearling has really developed. Famous for their black, eggplant or grey hue with sometimes emerald green reflections, these pearls are shrouded in mystery.

South Sea pearls or Australian pearls are obtained according to the Japanese technique, but the climate favoring their growth, they are generally larger and are processed to obtain a greater variety of hues.

Freshwater pearls or pearls from China, cultivated since the 13th century in Chinese rivers, these pearls are renowned for their abundance inducing a lower price. With a variable quality for both form and shade, the progressive improvement of the techniques used for their cultivation makes it difficult today to distinguish a beautiful freshwater pearl from an Akoya pearl or a natural pearl.

Tahiti pearl: why such a craze?

Tahiti’s black cultured pearl is attracting the spotlight of the jewelry world these days. Is it due to its deep east and exotic origins? The Flamme jewelry in pink follows this trend closely and is currently working to offer you a new range of products with this pearl color.

For several years now, we have been offering jewelry made with cultured freshwater pearls. Take the time to discover our Timeless collection. Follow us to learn more.

How to clean a pearl?

The pearl is organic, it is therefore very sensitive and you have to think about removing it when you perfume. It can be polished using a soft cloth to remove traces of grease and dirt.

Due to its low hardness, it is necessary to take care of it and be careful not to expose it to shocks and other minerals. You should also avoid exposing it to high temperatures or putting it in contact with chemicals, household products or perfumes. To store it, wrap it in a fabric or a jewelry pouch to prevent the bead from scratching on contact with other materials.

Discover our others precious stones

How to choose a quality diamond?

In the universe of precious stones, the diamond is undoubtedly the most desired and coveted stone. You have certainly seen, touched and possibly bough...