Etymologically, the term “Tourmaline” derives from Sinhala, the language spoken in Sri Lanka, “thuramali”, literally: the stone of a thousand colors. Its origin is magmatic in granite and pegmatite. These stones are distinguished by their vitreous luster and a wide variety of colors.

Known for the great diversity of colors that it can put on; tourmaline is a very appreciated stone in jewelry as it leaves room for imagination in terms of creations. It is also endowed with many virtues associated with well-being.

Stone symbol of verticality, tourmaline represents the alliance of earth and heaven. In the world of lithography, it is an essential crystal in order to protect ourselves from the evil energies that surround us. In jewelry, its range of exceptional shades or hues makes it a jewel of choice, aesthetic, discreet and original. Discover everything you need to know about this stone in order to create a unique and tailor-made jewel.

Tourmaline is a mineral of the silicate family that is recognized as a stone of mixed colors and can even be multicolored. A silicate is a mineral composed mainly of silicon dioxide associated with metal oxides: aluminium, magnesium, iron, calcium or sodium. The various color variations that tourmalines can present are thus produced thanks to a greater or lesser concentration of these oxides.

These natural elements of the composition of a stone vary according to the extraction environment, namely a strong presence of manganese, nickel or cobalt in the soil. The mineral can have several colors: green, pink, red, ochre, brown, blue, black, or be colorless. This is why there is a wide variety of tourmaline stones, although the best known is pink tourmaline.

To distinguish all varieties of tourmaline, each crystal has been given a unique name. These include:

There are also exceptional tourmalines such as melon or indicolite tourmaline, so named because of their blue and turquoise hues or watermelon tourmaline, very sought after because of its bicolor aspect with green on one side and red on the other. The most popular variety of tourmalines is Paraíba, named after the region of Brazil where it was discovered, for its very rare neon blue color.

Tourmaline can take very variable shapes: cylindrical or prismatic, it can be colored, opaque or transparent at the same time. By the way, in crystallography, tourmaline is considered to have a rhombohedral crystal system. This means that it has six equal, diamond-shaped faces.

Its hardness is located on the Mohs scale between 7 and 7.5. As an indication, this scale includes 10 degrees, the diamond being the hardest mineral, classified 10. Thus, it is a gem robust enough to be set in jewelry, to be polished or turned by professional jewelers. It is for this reason that these experts are the best people able to build up a stock of authenticated and quality rough stones. Usually, we offer a tourmaline jewel on the 8th wedding anniversary: a ring, a pearl necklace or earrings.

Thus, to recognize without error a true tourmaline, it is necessary to analyze its aspect and color. To the naked eye, a tourmaline may or may not show impurities: green tourmalines do not, while specimens with pink or red tones may. It is the inclusions that authenticate the origin of the stone. In the case of an excellent quality stone, inclusions are not visible to the naked eye, but only by means of a microscope x 10.

What is the price of a tourmaline?

Natural tourmaline deposits are found in Australia, the United States, Madagascar, Russia, Sri Lanka, Mozambique and Tanzania. The most popular are from the Santa Rosa mine in Brazil. The name tourmaline comes from the Cingalais: Thuramali (or Thoramalli), which means the stone with a thousand colors or multicolored stone. This explains the cost of a copy: the extraction methods are necessarily manual, so as not to deteriorate the mineral.

In fact, some tourmaline deposits are called «primary», which means that the minerals are extracted directly from the vein where they were originally formed. Others come from alluvial sources. These are geographic areas where tourmaline crystals have been deposited through soil alteration or erosion. In this case, the stones can be collected by hand, in the bed of rivers or sieved on the ground.

Tourmaline is a semi-precious stone. The prices at which tourmalines are traded depend on their color, quality and provenance. Thus, a carat of blue tourmaline can be bought between $200 and $1,000, while a tourmaline called watermelon or melon, has a price between $100 and $400 per carat.

In history, some tourmaline stones have been traded at exceptional prices. This is the case of The Great Divide, a unique example from the Pederneira mine valued at $1.2 million in 2011.

What are the virtues of tourmaline?

Tourmaline is an essential stone in lithotherapy, because of its protective virtues. In women, tourmaline tends to offer them a tenfold increase in their abilities, which allows them to be more active and to succeed in their professional lives. For men, wearing a tourmaline bracelet allows them to anchor better and gain greater self-confidence. It is also perfectly suitable for children, which it protects while allowing them to develop their sensitivity.

According to astrologers, it is the stone that is best suited to people of the virgin astrological sign. Pink tourmaline is perfect for scorpions in whom it soothes emotional wounds and heals the heart chakra by strengthening the feeling of love and empathy.

Tourmaline is usually associated with the root chakra or the heart chakra. However, since this stone can present an infinite diversity of colors, each copy is associated with a chakra because of its dominant hue. For example, green tourmaline helps strengthen the immune system because of its connection to the heart chakra. Blue tourmaline will relieve sore throat. In this case, it can be worn as a necklace or ears for greater efficiency. During meditation, it is often seen placed at the level of the solar plexus, which explains why it is regularly mounted as a necklace or pendant.

A real shield, tourmaline acts by blocking harmful and negative electromagnetic waves. The wearer is then protected from all that surrounds him, which favors for him healthy and virtuous social relations. Well surrounded, the tourmaline wearer in bracelet, earrings and necklace multiplies his self-confidence, power and dynamism. Whether it is in its form – raw, rolled, in pieces or mounted in jewelry – tourmaline is an essential well-being ally that protects the person as his home if placed in a spherical container at the entrance of the house. In alliance, accompanied by a pearl of tiger’s eye, tourmaline multiplies the protective virtues in favor of its wearer. It can also be worn with a tiger’s eye stone in onyx, a crystal stone carnelian or a lapis-lazuli labradorite.

The protective energy field developed by tourmaline will positively influence the wearer’s physique. As a balance stone, it makes it easier to remove toxins from the body, which rebalances the endocrine system and relieves stress and pain. This protection can also be applied to the waves of household appliances, which the stone blocks with equal efficiency. In some people, tourmaline has helped to reduce migraines, painful kidneys and eczema. 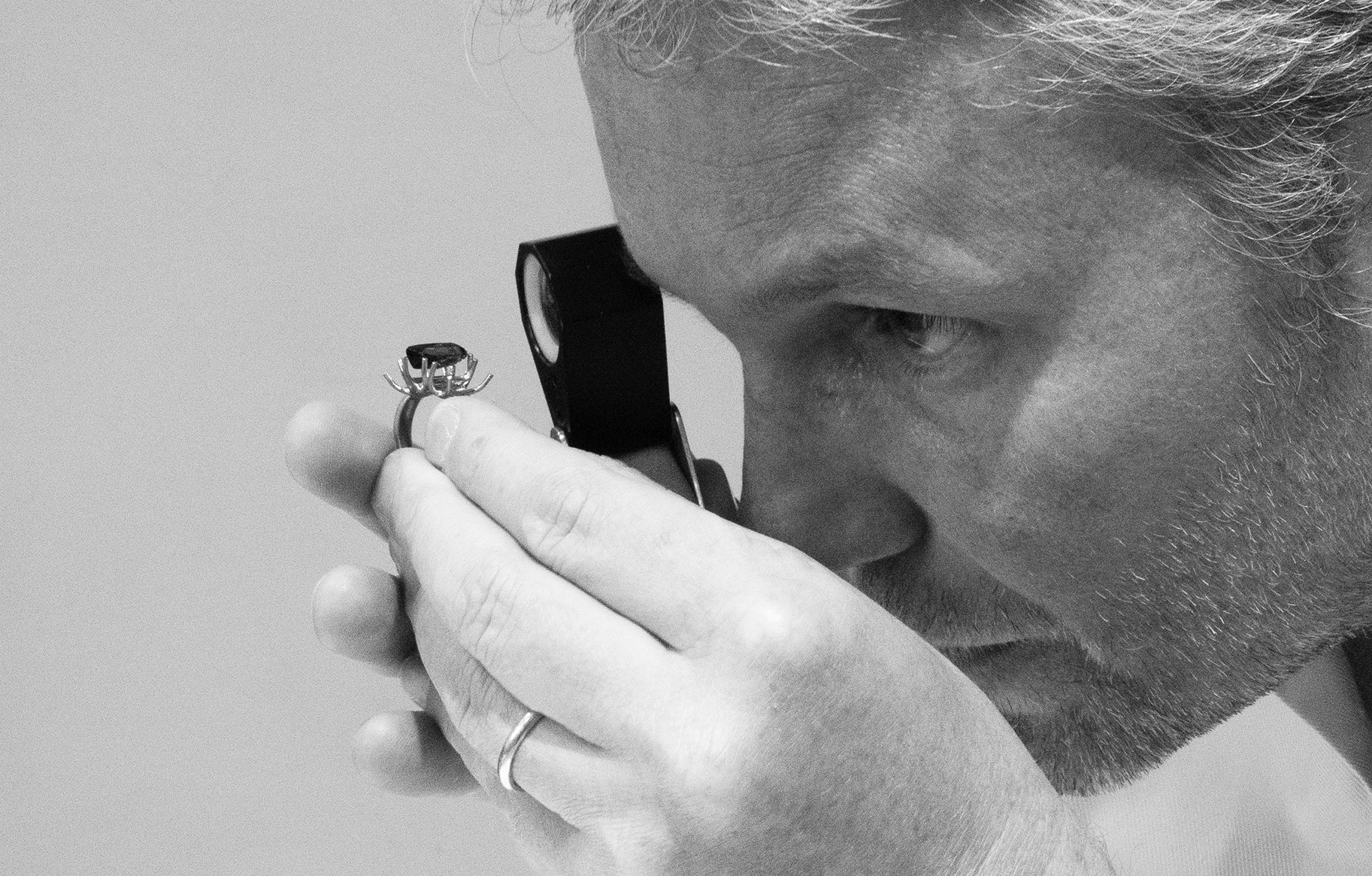 How to maintain, clean one’s tourmaline?

Very robust, tourmaline does not require too much maintenance. However, care must be taken to avoid sudden changes in temperature.

Tourmaline may lose color or shine after regular use. To preserve your jewelry, make sure to store it in a closed box, protected from shocks, moisture and light. It is recommended not to store stones of different hardness together. Indeed, hard minerals could scratch the most fragile.

It is quite possible to clean a jewel equipped with a tourmaline stone with a soft cloth impregnated with warm water. In lithotherapy, it is advisable to refill a black tourmaline on a heap of coarse salt and in the light of the full moon. For other varieties, a demineralized water wash and a classic refill are suitable.

Ask Bengems for the setting of a unique tourmaline stone as a ring or necklace and enjoy all the virtues and beauty of this incomparable gem every day.

Discover our others precious stones

Each month of the year is associated with a specific stone. A stone with its own symbol and virtues. Since the dawn of time, stones have been consider...